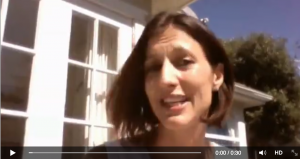 If you’ve been following Lecretia’s story, you are probably aware that Lecretia is going to be on TV One’s Sunday tonight at 7pm, talking about her illness, her action in the High Court, and a few other things besides. We’re pretty nervous about it, as you can imagine. Both Lecretia and I are resolutely private people, but we do understand the public interest in Lecretia’s case and the need to help people understand where Lecretia is coming from, which is why we agreed to three days of cameras and interviews, at a very challenging time, to get the story told.

If Lecretia was able to choose the death she wanted, most people would probably have never known about her. My beautiful wife has lived a full and rich existence, greatly appreciated by those that know her. She is revered and respected by her friends and colleagues. Her cancer has struck us as utterly tragic, and utterly, utterly unfair. But if Lecretia had her choice, we would be working through it as a family and when the time was right, we would be coming together, saying goodbye, grieving and being privately devastated, and there would be no need to ‘tell the whole world about it’. Lecretia would have lived a wonderful life, with a poignant and precious closing chapter, a life lived as a gift to herself and to the favoured few that knew her.

But as Lecretia’s cancer forces her to confront her own mortality, she realises that she isn’t likely to have a death that is agreeable to her. The odds are that the essence of who she is will gradually unravel, and she will lose a lot of what she values about her life. Though she might remain alive, she would not truly be what she regarded as living, and she would be forced to continue to exist in a way in which she does not wish to be remembered. To avoid this, she has only one option: take her own life. And that would rob her and me and her family of quality time with her.

As a rational person, Lecretia has looked at how she might achieve an ending that gives her the maximum amount of quality life, and the minimum amount of suffering. She was inspired by Terry Pratchett’s famous Dimbleby Lecture, read by Tony Robinson. As with the UK, such a death is not possible in New Zealand. But there was hope in a recent Canadian Supreme Court decision. After consulting her lawyers, she decided to take a similar action here.

Her court case is not going to be a forum for a broad debate about end of life choice, as much as some parties would like it to be. It is going to be about her, and her alone. She doesn’t have the luxury of time for politicians to make up their mind about the issue, and they certainly don’t appear to be in any hurry to have a conversation about it. So Lecretia is doing what’s right for her, and taking the only action available to her, to get the answers she needs about the Crimes Act when viewed through the lens of the New Zealand Bill of Rights.

Personally, I think that it’s a disgrace that she’s being forced to take action in a courtroom, and that interest groups who would rather see my wife suffer to satisfy their own warped and dogmatic principles are doing their best to stand in her way. The way I see it – they are free to die their way, Lecretia should be free to die hers. And it should be nobody else’s business but hers and the consenting physician that agrees to help her.

Some people compare this with suicide. It is really very different. It is not as if, by not doing this, she would miraculously go on living. The difference between her and a suicide is that she is genuinely dying already. That is a fact, and we can’t change it, as much as we wish it weren’t true. She doesn’t have the choice to live. If she had that choice she would take it. This is not a choice about if she dies, it is a choice about how she dies.

Lecretia does recognise that in taking this case, she is bringing these issues into the spotlight again. We hope that by going public about the case we get people thinking about what they would want if they were in Lecretia’s situation. We hope that politicians will confront this issue and summon the bravery to have the debate. If Lecretia dies and politicians sweep the issue under the rug again without looking at a law change that continues to poll as having overwhelming public support, and that even our Prime Minister has come out in support of less than 12 months ago, that would heap tragedy upon tragedy.

If you believe our politicians should be addressing this issue and that Lecretia and others like her shouldn’t have to go through the courts to get the choice they want, there are several ways you can help make that happen. As for us, we are focussed on the hearing, so that hopefully Lecretia can be granted the choice that she desires. Thanks for taking an interest in her journey.