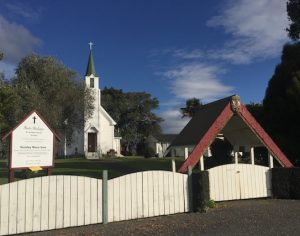 Yesterday I found my diary clear of appointments, and with the prospect of heading to Australia and then back home to New York for several months, I decided to drive south from Auckland to Tauranga. Lecretia is buried there, in a quiet, well-maintained cemetery. I also wanted to see Lecretia’s parents, Larry and Shirley, and to visit Ferdinand, Lecretia’s cat, who now lives with them.

About twenty kilometres before reaching Tauranga, I began to see signs for Te Puna. Lecretia and I were married there, at St Joseph’s Church. Te Puna is a small, semi-rural community. On a whim, I took an exit off the highway and drove through the backroads, letting my memory guide me.

It didn’t take long to find the church. It was smaller than I remembered. It was painted white, with a green roof, and the grounds were well-manicured. The entrance to the church grounds were secured with a white gate, over which a traditional Māori waharoa arch is placed. I undid the latch and entered the grounds, half-expecting someone to stop me.

No one did. It was a Saturday afternoon and the grounds were deserted. Being far back from the main road, there was barely any sound, only a unseen tractor lumbering somewhere in the distance, and the crunch of my shoes on the gravel underfoot.

I hadn’t been back to the church since our wedding day. Lecretia had often talked of going back there for a service, to sit on the pews as parishioners, and not as a bridal party, to experience the church in an ordinary Sunday service. We had done that once, before the wedding, and we found it a pleasant experience. The people there were kind and friendly, and shook our hands and smiled after the service, and we shook theirs. I remember finding it odd how welcoming they had been of these strangers in their midst.

I walked up the steps to the door of the church. To my right was a noticeboard, highlighting various community events, but on the top corner, taking up most of it, was a poster from Right to Life with a picture of a foetus in the womb. Right to Life has now taken to issuing press releases against my statements to the media, even going so far as to issue at least one Press Council complaint against a newspaper that published my story, and a Broadcasting Standards Authority complaint against a radio station that broadcast an interview with me. Neither were upheld. Ironically, this same organisation has been decrying that their free speech is being attacked because a Green MP had the audacity to suggest that scared young women might not want to be threatened with plastic babies, placards and prayers when they visited hospitals to undergo the traumatic experience of seeking abortions.

I tried the door of the church, and it was unlocked. I walked into the cool, dim interior, and stood in the nave, taking it all in. There was the transept where we had stood and had exchanged our vows. There was the stained glass window in the apse where the light had shone through. There were the rows of pews, on the edge of which I remembered ribbons. The church had been full of our friends and family once. Lecretia had walked in, past where I now stood, accompanied by her father and a bridal march, and approached me in front of the chancel. She had never looked more spectacular that day. And she was never happier.

I turned to leave the church and something caught my eye. In the narthex, behind the last pew, was a stack of leaflets. I walked to them and spotted one that was immediately familiar. It was a Care Alliance leaflet, professionally printed, with the telltale dandelion logo in the top left corner. It was a leaflet instructing the reader to write to the Health Select Committee against assisted dying. Inside the leaflet were step-by-step instructions and a list of reasons why assisted dying, according to them, was unnecessary and unsafe. The deadline for submissions had long since passed, but a small stack of leaflets remained, evidence of an earlier agitation.

How many leaflets did they print I wondered? Did every church in New Zealand have a similar pile? What words were uttered here, in this place that we married, in relation to me and my wife? I know some opponents throw the words murder and suicide around in relation to assisted dying, were those words uttered here?

The Care Alliance, for all its claims of being a group of many faiths and beliefs, certainly knew its audience and where to find its most impressionable supporters. Through the exhortations of priests and ministers, they banged the drum and blew the trumpet. Euthanasia, they must have said, just one more herald of the end of days.

The church didn’t feel that welcome all of a sudden. I left, and closed the door, and descended the steps, the same steps I had descended with my bride ten years prior. On that day I was happy, but on this day I was aggrieved and my feelings confused. I walked out and over to the car, started the engine, and drove away. I doubt I will ever return.