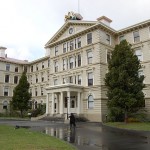 I’ve been asking Lecretia’s friends and family to share some stories about their experience of knowing Lecretia. One of the things I love about my wife is her humility. She tends to downplay her contributions and achievements and is the sort of person who would normally hang back and let others take the limelight rather than take it for herself. In the stories I’ve received so far this has proved a consistent observation.

This first story is from one of Lecretia’s ex-workmates, Zoë Prebble – who recalls meeting Lecretia for the first time.

In my last year of Law honours, Lecretia used to come every week with Geoffrey Palmer when he taught our public law masters’ seminar class. It was a two hour seminar at something like 6 or 7 pm on a Tuesday evening. I remember thinking, whoever this intimidating, brainy right-hand person of Geoffrey’s was, it must sometimes feel a bit above and beyond the call of duty to have to listen to us all bang on for 2 hours at the end of her work day. But she was always gracious, and turned up nonetheless, and never pronounce “Oh you boring dummies!” to us, even if the thought may have crossed her mind!

My cousin, Becky, was also in the seminar, and she had done a summer clerk stint with Chen Palmer and had come across Lecretia who was already there. She said she was a lovely, as well as brainy, person.

A couple of years later, I worked with Lecretia when she joined the Law Commission. I was impressed and, well, awed really, again – both because she’s so smart and accomplished and absurdly capable and churned through so much work, but also because I got to know her better as a colleague, and got to know her sparky sense of humour, and real kindness.

This always sounds cheesy to say, and I’m sure Lecretia hears it a lot, but I’ve looked to her for a long time as an impressive and important role model. I’ve always been impressed by her and admired her. That’s only intensified over these last years and months as she’s been so courageous and generous with her time and energy in this really important fight for law reform in the area of death with dignity.