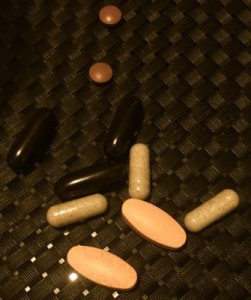 Despite the best efforts of modern medicine, cancer remains, for the most part, incurable. Even when we beat it back and it enters what’s called remission, its essence abides in the twists and turns of our chromosomes, waiting for the slightest defect in the intricate machinery of our cells to let it burst forth like a dark flower. Siddhartha Mukherjee in his excellent book The Emperor of All Maladies, describes it as follows:

Cancer is an expansionist disease; it invades through tissues, sets up colonies in hostile landscapes, seeking sanctuary in one organ and then immigrating to another. It lives desperately, inventively, fiercely, territorially, cannily and defensively – at times, as if teaching us how to survive. To confront cancer is to encounter a parallel species, one perhaps more adapted to survival than even we are.

This image – of cancer as our desperate, malevolent, contemporary doppelgӓnger – is so haunting because it is at least partly true. A cancer cell is an astonishing perversion of the normal cell. Cancer is a phenomenally successful invader and colonizer in part because it exploits the very features that make us successful as a species or as an organism.

Treating cancer, therefore, whether it’s surgery, radiotherapy, or chemotherapy, is one of medicine’s hard problems, and despite all of our advances, even modern therapy is still, as one writer describes it, like beating a dog with a stick to get rid of its fleas.

Lecretia has experienced what is called ‘the standard of care’ which is the best the peer-reviewed science can currently offer a patient with her illness. She has had surgery to debulk the tumour – the most obvious hunks of it stripped out with a surgeon’s scalpel. Radiation has been fired through her skull into her brain, searing good and bad tissue indiscriminately in order to deprive the bad cells of their ability to divide, and she has swallowed cell-killing cytotoxic chemicals which hunt out cancer cells, but also white blood cells and platelets, and interfere with their perpetuation.

But surgery can only really be done once, and there is a limit to how much radiation a human being can safely take in a lifetime, and the cancer cells adapt and mutate and build up defenses against cytotoxic agents, so all of that eventually comes to an end, and you have either beaten back the cancer, or you haven’t. Despite four years of solid cancer-killing efforts, Lecretia’s cancer abides.

We’re now into the realm of hope, speculation, and hypothesis. I’ve been poring through journal articles and onocology websites to see what the next steps might be. The website Astrocytoma Options has been particularly helpful. We visited our oncologist today and it’s clear that he doesn’t believe there’s anything that can be done – his prescriptions are to deal with symptoms, not to deal with the tumour. But Lecretia and I haven’t given up. Though at this point, if it weren’t for my science savvy, I’d be susceptible to any charming mystic who promised to cure my wife. And we’ve had plenty of those send us well-intended but ultimately fruitless emails.

The seriously promising options are few and far between. There is a device called Optune, which is similar to radiotherapy in its approach. It fits like a skullcap and applies tumour-treating fields to the brain. It’s FDA approved but is only available to residents of certain countries, of which New Zealand isn’t one. My advice to you, if you’re planning to get cancer, is to make sure you’re rich, American, and well-insured first.

We’ve had a few people point out the work of Duke University with their polio virus trial, which featured recently on 60 Minutes. I’ve contacted them, but they are concentrating on glioblastoma at present, a concentrated, localised tumour. My wife’s astrocytoma is diffuse and expansive, so it’s not easy to see how their approach would work. Nevertheless I’ve pleaded with them for help. My fingers are still crossed that they might consider her for a trial before she becomes too unwell to travel. But they are adamant they are focussed on GBM.

Finally, there’s the idea of using low-toxicity off-label anti-cancer drugs, in combination with the drugs available within the standard of care, to assault the tumour from multiple directions. It’s down this path that we’re headed. We’re hoping to get our oncologist’s support to resume Lecretia’s use of temozolomide, and to augment this regime with a variety of other drugs that hopefully support the uptake of anti-cancer agents and interfere with the mechanisms that allow the cancer cells to replicate. I’ve been reading a lot about various drugs that have these properties. Ben Williams, professor emeritus at University of California, San Diego, claims to have cured himself of glioblastoma with this approach, and outlines his thinking in his film Surviving Terminal Cancer.

But it’s fair to say, I really have no idea what we’re doing. I feel like we’ve been dropped into a foreign country, where all the signposts are written in pharmacological greco-latin and scan like the names of forgotten angels and demons, and where the guidebooks are useless but you still feel like there must be some local wisdom that you could avail yourself of if you could only become fluent in the language.

In his book, Mukherjee reflects on the words of poet, Jason Shinder, who said: “Cancer is a tremendous opportunity to have your face pressed right up against the glass of your mortality.” But Mukherjee says what patients see through the glass is not a world outside cancer, but a world taken over by it — cancer reflected endlessly around them like a hall of mirrors.

My hope is that one of those reflections depicts my wife restored, unafflicted by her doppelgӓnger. But it’s impossible to tell just now which reflection that might be.